Posted on February 7, 2013 by soopermexican 3 Comments 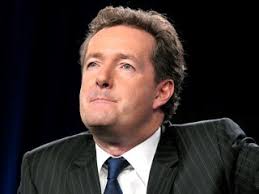 While the police continue to hunt for liberal gun-grabbing Obama-loving cop murderer Chris Dorner, some have taken to smack Piers Morgan with the same accusation the leftist media makes when a criminal with right-wing ties make:

Hey @piersmorgan this is why we need ‘assault’ weapons – to defend ourselves from YOUR cop-killing fan: bit.ly/12w46mp

It took a while for the dimwit to conjure up this repetitive missive:

Ahhh. So NOW it has nothing to do with politics, you degenerate maggot? Pathetic.

Shocking to see how many gun rights tweeters think this shocking LA cop-killer’s manifesto is something to joke about. It’s not.

No, it’s NOT a joke. The leftist media on MSNBC and CNN including Piers helped radicalize this nutjob and now he’s murdering innocents, killing cops, and hunting their families.

But it isn’t the time for politics NOW, is it?